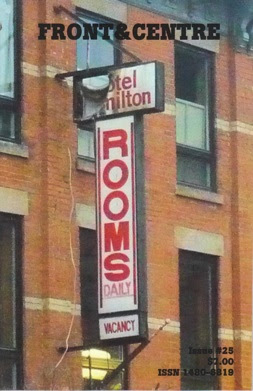 
In the Editorial Feature of Front & Centre's Special Edition celebrating their 25th Issue — "Two writers talking" — a discussion between writing couple Alexandra Leggat and Salvatore Difalco about his latest book The Mountie of Niagara Falls and Other Brief Stories (Anvil Press, 2010), Leggat and Difalco exchange:

Alexandra Leggat: Which medium do you think is the best vehicle for exploring the depths of more risk taking writing?

Salvatore Difalco: Whatever medium you're permitted to express yourself in. If you can't get your so-called experiments published then perhaps you should rethink things. Writing in a vacuum is death. Pushing boundaries is meaningless unless you have an audience that recognizes your bravery and ingenuity.

Difalco also suggested in his dialogue with Leggat:

I don't know if writers in Canada are really capable or permitted to write edgy fiction. But then again, that word is problematic, isn't it? If it means you're writing from the margins ... either by choice or circumstance, well, okay. If it means you're willing to explore certain darker regions of the human psyche and the human condition, I guess it's as efficient an adjective as any.

That's where a magazine such as Front & Centre (formerly known as Black Cat 115) has served so valiantly as a vehicle for new writing. Free of the shackles of government funding agencies, Matthew Firth and Bill Brown have created a seminal litmag of new Canadian and International fiction. Emerging fictioneers stand alongside established authors of the gritty, the urban, the hard-edged, the transgressive, and all with F&C's trademark mordant wit, and tongue-only-partly-in-cheek humor. Each issue is a mix bag of unexpected delights and reviews of current fiction.

F&C #25 is no different (only perfect bound this time):

Get your copy before someone else does.

Order by sending a cheque (made payable to M. Firth) to: